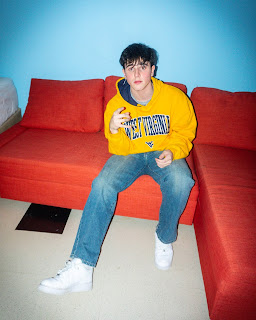 1. Tell us about your new song? And what’s the story behind it?

My new song is titled “out to dry” and it’s produced by Boibin. This song was made in my home studio in about 30 minutes. When I first heard the beat I knew it was an instant hit, I had never heard anything like it and it instantly got my attention. Being 16 and still being in high school, there’s a lot of things that switch up constantly in my life including my friends. This song was written about how most of my friends switched up on me because of the number of followers they had compared to me. These were people I considered my best friends.

2. What makes your music unique? And how would you describe it?
What makes my music unique is my melodies, beat selection, lyrics, and being able to consistently make quality records. I’d describe my music as catchy because usually after 2 listens the listener will know a majority of the lyrics of the song.
3. Which is the best moment in your musical career that you’re most proud of?
The proudest I have been of my music was when I hit the 100k milestone on one of my songs. The song’s name is titled “Hurting”, never to this day would I have thought that 100 thousand times that song would be streamed. I created that song on a blue snowball microphone and mixed it myself in Audacity.

4. How do you balance your music with other obligations – family, friends or work?

In my life, I have a lot of obligations. I’m a junior in high school, I play baseball and I have my music. Right now school is the most important. I try to make at least 18 songs a week and usually I meet that goal but there’s always some weeks where other stuff comes up and I don’t meet that goal. During the summer and breaks during school is when I make my best songs and those usually will be the songs I release throughout the year.

5. What advice would you give to aspiring musicians?

My advice to new musicians is to try to find a couple people to work with and grow with. If you don’t have anyone you have chemistry with to make songs with you, your music will never be as good as it can be and you will never improve as fast as you want.

6. If you had one message to give to your fans, what would it be?

Stop caring about what people think of you because 95% of people won’t support you until you’re up. I love all of you and appreciate all of the support because you guys here right now will be the same OG fans that’ll be here when I blow.

OUR BEST INTERVIEW WITH THE TALENTED DLZ

VIDEO OF THE DAY: “EXPENSIVE”, BY RYAN BAUER

Interview With Rising Artist : Rina B

Go to the Arqam options page to set your social accounts.