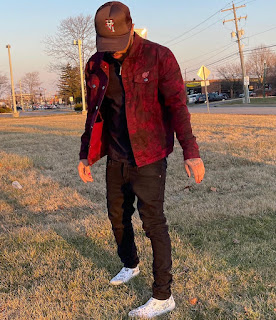 Fr6nco is on our list of the rising stars of 2021 for a while now and with his highly anticipated latest release “Spaceship Swervin”, feat 916 Frosty, he took a new turn in the industry.

Once again, Fr6nco teams up with the best and unveils a memorable vocal performance worthy of the greatest. His alluring flow brings fresh air into the musical landscape and that’s for our greatest delight.

OUR EXCLUSIVE INTERVIEW WITH THEKIDSAX

OUR EXCLUSIVE INTERVIEW WITH THE KID TREVI

1. WHEN DID THE IDEA TO BE AN ARTIST/PRODUCER BEGIN?

In late 2017 when I was working at sams club pushing carts and i went on Instagram to notice people like “Lil Pump” were blowing up and i thought to myself if someone like this guy can make music i know I can do it 10 times better.

2. WHAT IS YOUR FAVOURITE PROJECT YOU’VE WORKED ON TO DATE?

My favorite project always changes, it’s always the most recent thing I’m working on at the time.

3. CAN YOU ROUGHLY OUTLINE YOUR CREATIVE PROCESS – FROM THE BEGINNING OF AN IDEA FOR A PROJECT OR A COLLABORATION TO THE POINT OF COMPLETION?

It’s a lot harder than people think. A lot of people always try to catch you at your lowest and most vulnerable points. Always got to be on ten toes.

4. HOW IS THE REALITY OF BEING AN INDEPENDENT ARTIST/PRODUCER COMPARED TO YOUR EXPECTATIONS OF IT?

I really just go into the booth and talk about what’s on my mind or what I’m going through in the moment. Nothing is written, everything just off the top of my head!

5. WHAT ARE SOME OF THE BIGGEST CHALLENGES AND DIFFICULTIES YOU FACE WHEN STARTING NEW PROJECTS?

Getting people on board to supporting my new ideas. I set the bar very high for myself so most people will think my goals are me putting a lot on myself at once but in reality that’s what keeps me going. I love the pressure.

6. WHAT DO YOU DO TO STAY CALM WHEN A PROJECT IS NOT GOING AS PLANNED?

Really I always have a set plan going into my releases so I do everything I can do avoid anything from not going to plan.

7. DO YOU HAVE ANY INSIGHTS, TIPS, OR ADVICE FOR SOMEONE STARTING LOOKING TO START THEIR MUSIC CAREER AND LOOKING TO GET INTO THE MUSIC INDUSTRY?

Take every opportunity you get even if you think nothing will come out of it. You can become successful just off a conversation with the right person

8. WHAT ARE YOU MOST PROUD OF IN YOUR CAREER SO FAR?

I definitely am proud of myself so far, but there’s no stand out moment that I’m proud of cause I won’t be satisfied until I’m at the top.

9. WHAT DO YOU DO WHEN YOU’RE NOT WORKING?

I’m never not working. I have to be working at all times, if you don’t want to put in the work there’s always someone else that will. The key to this music business is good work ethic

1. Tell us about your new song? And what’s the story behind it?

Spring Rush is my new single releasing to all platforms on March 18th.  I partnered with Ryan Jones and Space Hobo to help make this Jazzy Pop-Rock bop!  I wanted to release this single as a welcoming to the new season Spring which technically starts on March 20th.  If you close your eyes while listening to ‘Spring Rush,’ you can almost see the flowers blooming and the leaves returning to the trees.  This warm and upbeat instrumental track captures the feeling of a new beginning after a long winter in a way that words never could.  Guitarist Ryan Jones’ leads are playful and evocative, while drummer Space Hobo’s rhythms stretch out beneath constantly evolving harmonies.  The perfect soundtrack to a warm spring day.

2. What makes your music unique? And how would you describe it?

All of my music is instrumental but what makes my music unique is that it is genre-defying. I don’t like producing the same type of music over and over and over.  To try and keep the musical storytelling aspect of each song engaging, I try blending multiple genres and song styles into one piece and even diversifying my chord progressions and such so that no two songs sound alike.  Within each single and even within my albums you will find that each song is a journey telling multiple stories.  The magic of instrumental music is that I may have a story in mind as I compose and produce it but the Listener may very well experience something completely different.  Music has such a unique way of speaking to people that you never know what memories and images a sound will produce in their heads.

I also enjoy experimenting with new instruments that you may not hear in mainstream music so sometimes you’ll hear ethnic instruments from international countries make an appearance on a song.  I don’t want to limit myself to the instruments found mainly in the Western world as I firmly believe that every instrument wants and deserves to be heard.  As I gain access to more and more instruments you will be sure to hear them make a splash in my upcoming songs.

3. Which is the best moment in your musical career that you’re most proud of?

At the beginning of 2022, I released my 26-minute epic, Perlivash. I started my music-producing journey back in February of 2020 with almost no prior knowledge in music theory or digital music production.  I spent countless hours reading articles and blogs, as well as watching several YouTube videos to help myself learn all the nuts and bolts behind composing and producing music and songs.  I never would have imagined that in less than two years I would be able to compose and produce a 26-minute cinematic song.  Perlivash exemplifies all progress I have made throughout the years as it not only showcases my confidence in more advanced musical progressions but also shows just how vivid and wild instrumental music can get! If you have not taken a listen, this is the song I recommend all new listeners enjoy as it is a great introduction to the music of PsychCloned!

4. How do you balance your music with other obligations – family, friends or work?

I make music out of pure love and enjoyment. It is something that birthed out of having a ton of free time at home due to the pandemic having forced us to live more indoors, so I don’t necessarily view what I do with music as an obligation or a career. I still have my full-time job in Marketing which I really enjoy and when I have spare time or when the wave of musical inspiration hits I work on music.  Music has and will always be a stress-relieving activity for me.  I don’t want to ruin my passion for music by transforming it into a job of some sort.

5. What advice would you give to aspiring musicians?

If you love listening, playing, or making music, then do it!  Go out and show the world the stories and songs you have to offer! I know putting yourself out there is scary and not everyone makes it big, I mean I for sure am still a very small artist, but if you don’t give yourself a shot, if you don’t give all the billions of people out there the opportunity to hear your sound, then it is never going to be heard! You will never know if you are the next star in the music scene.

Yes, getting started is probably one of the hardest things.  It takes time and money to make good music, but with any hobby or activity, even if you want to view it as a career, you need to put the time and effort to make it work.  Nothing in life is easy.  If you truly want something then you need to go out there and grab it with your own two hands.  Take that leap of faith and reach for the stars!

6. If you had one message to give to your fans, what would it be?

Thank you all for your continued support throughout the last couple of years.  While I am still a growing artist myself, I love to know that there are many out there looking forward to my next releases.  It means the world to me to know that my music and sounds resonate so soundly with each of you.  I want to continue to spread joy and excitement over music so please continue to lend me your support as there are many more musical journeys for us to take.

7. What’s next for you? Any upcoming projects?

Spring Rush will conclude my “Winter of Melodies” campaign.  Since the start of the new year I have released five singles: Perlivash, Leap of Faith, White Lotus, Full Throttle, and Spring Rush.  Each of these songs are a precursor to the new EP I plan to release this upcoming summer. If you have enjoyed any of the new songs then I think you won’t want to miss the new EP.  Be sure to follow me on your preferred music streaming platform to be immediately notified when the new songs release.  Alternatively, you can find me on Facebook and Instagram, via @PsychCloned, where I plan to post teasers and snippets of the song.  If you want to be the first to hear what new stories are coming, be sure to follow me on there as well!

My newest release song would be “ Connection” The story behind it is a relationship or an idea describing sex n weed while being dressed up to impress.

What makes my music unique I don’t try to sound like what’s “Hot” at the moment I stay in my own lane I almost craft the majority of the beats and vocal recordings.

The best moment would be a showcase I did in Austin Tx for concert crave. I met some dope artists and made me feel like I was on the right path of my journey.

I would tell them to keep dropping as much music as possible to find their sound or voice to help them stay consistent And to don’t give up gotta remember why you started.

Be true to yourself and spread more positivity

7. What’s next for you? Any upcoming projects?

I’m planning on putting together a mixtape I don’t have a name for it at the moment but I do have some songs prepped for it. Including “White Heartz into”